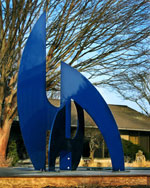 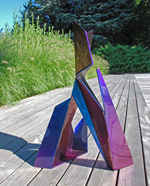 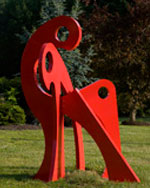 My sculpture is concerned with the concepts of space, place and scale using various materials such as steel, stone, aluminum, wood, and even plastic. The materials do not set my direction, instead I attempt to make the materials yield to me while still preserving and embracing an understanding of its’ limits. My work relies on formal clarity and uses variations of complementary elements. I begin with the traditional process of making sketches and then working out the form with numerous maquettes. The ultimate scale is based on the idea that the sculpture is not intended simply as an object on display in space, but as a place in itself.

To me the challenge and joys of creation are equally related to visualization and execution. My approach requires understanding and executing the entire process of creating sculpture that should not be hindered by the artist's limitations. I don't believe that art needs to solve or define problems for the public or resolve inner concerns and anxieties. What art should do is provide the best opportunity to retain or regain the creativity we all had as children and let us feel we can experience the work without intellectual limitations and rules. I believe I am successful when I see not only adults viewing my sculpture but children climbing and touching my work.

Gilbert Boro’s work has been exhibited in galleries, art centers, public art venues and private collections in Connecticut, Massachusetts, New York, Chicago, San Diego, Carmel, Denver, Ft. Lauderdale, Vermont, and New Hampshire. Some of his larger and most recent works are now on view in Connecticut. They can be seen at Purdue Pharmaceuticals and W&M Properties in Stamford, the Sculpture Miles in Madison and Ivoryton, the University of Connecticut at Avery Point, Groton, and Studio 80 and Sculpture Grounds in Old Lyme.

Boro was born in New York and grew up in Great Neck, Long Island. He received a B.A. in art from Duke University and both a B.A. and a Master’s in architecture from Columbia University. He has received two traveling fellowships and several design awards. Boro has lectured or acted as a design critic at the Boston Architectural College, Rhode Island School of Design, the Kennedy School of Government, Harvard’s Graduate School of Design, and Duke University.