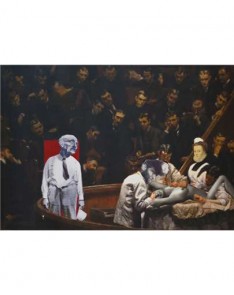 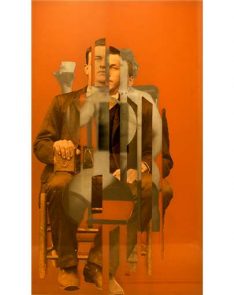 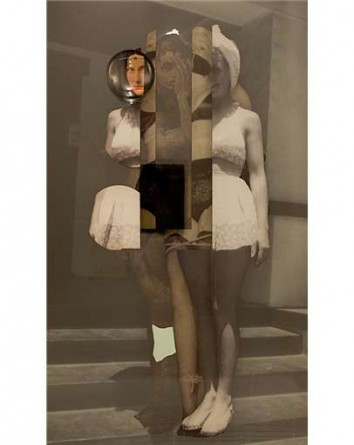 My art plays with the juxtaposition of images that have no previous relationship. By
doing this I change the story line in the imagery and create an alternative narrative.
I work with two types of images: anonymous vintage photographs and classic
masterpieces, which are familiar to the viewer.

I use recognizable images to engage the audience, which invite them to a closer
inspection of the work rather than just a glance from a distance. My art beckons viewers
to explore the dissected individual images that I have woven together behind multiple
layers of glass.

The use of optical lenses and lighting techniques enables me to highlight aspects
of the work I want to exaggerate while concealing other features. This technique
also gives my work dimensions that, depending on each different angle, offer new
perspectives, drawing the viewer to physically move around the piece in a voyeuristic
fashion. Through a thorough interaction with the work viewers discover little nuances

in each piece and create their own story from what is being played out by their own
engagement.

By using an image created originally by a master in art history and blending it with found
vintage photographs, I am compressing time into a small theatrical environment, which
I mount on a wall. I want to give form to my theory that all art is built upon some art that
has preceded it. The masterpieces I use represent a moment when art was at a peak; a
time of explosion in techniques and ideas. In contrast, the vintage photos represent the
birth and innocence of the photographic image, when it was still being scrutinized as a
valid medium of expression.

But it is all quite relative. I see thematic and technical connections between early
photographs and these paintings, which actually predate them by 200-300 years but
eventually forged a symbiotic relationship, one that I capture and interpret.  And where
master painters influenced incipient photographers, modern and contemporary art in
turn has been influenced by photography.

By connecting early photos to art masterpieces for new arrangements and taking
into account the various movements that have happened over the past century and
influenced my life as an artist, from Dada and Cubism to the combines of Rauschenberg
and the paintings of Bacon, I include subtle gestures toward each of them and invite the
viewer to appreciate the improbable relations that result in the moment.