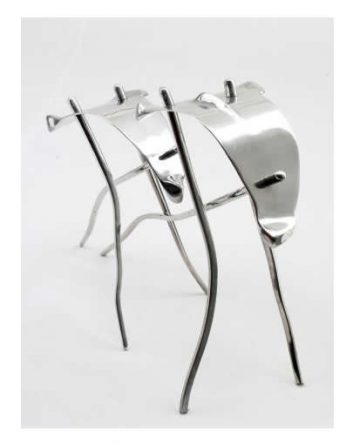 Daniel Escardó was born in Montevideo (Uruguay) in 1957. His great-grandfather was an engineer;his grandfather was a well-known doctor; his father was a radiologist, a professor of anatomy in the School of Fine Arts, and had hobbies such as archaeology and art. Escardó spent his adolescence in his father's clinic, surrounded by archaeological specimens,human bones, the dark room and the laboratory. During the seventies, Escardó completes his baccalaureate in engineering, and discovers he has a passion for the geometry of space. He later expands this knowledge by becoming skilled in the use of software for managing 3D models. Between the years 1983 and 1985 he participates in the workshop of Guillermo Fernandez, one of the youngest disciples of Torres García. In 1990 he starts to develop his first notions of dynamic sculpting. This sculpting technique is based on patterns that are repeated until the general structure of the piece is reached. The geometry and forms governing all living organisms have since become a focal point in all his work. Nowadays his research leads him to develop great structures, using the acquired knowledge, synthesizing shapes. In some way this draws him towards the geometrical, but never entirely discarding his biological beginnings.