Upon entering Kavachnina Contemporary, you almost overlook a sculpture to your immediate left. Does it get attention? Or does the viewer walk past? Neutral tones, both futuristic and ancient. While this particular sculpture by Salvatore Zagami may not be the feature of this exhibition, but the paradox in its aesthetic represents the general atmosphere of the show as a whole: the individual works seem old, or behind the frontier--but their arrangement represents a rapidly shifting array of styles. It’s just a season kick off show, without a true focus, but these works seem to collude with each other, as though to prepare for intrigue and upheaval.

On the right one sees a large scale painting by Vasily Kafanov. Two rectangular forms dominate the canvas at first, the larger yellow square is immediately cut in half by violent strands of black, the strokes resemble roots or lightning, attacking the restrained mood of the abstract shapes.

Organic red strokes are strewn about the painting to resemble some kind of murder in progress, and the more viewer looks at it, the more he senses that whoever painted this has a personal, deeply seeded vendetta against minimal abstraction or parallelograms.

What really gave dimension to the dualistic painting was the unassuming presence of two child-like figures just before it’s looming presence. They sit innocently on what looks like a piece of drift wood. They welcome the viewer without confrontation, almost like a diorama, allowing us to ruminate over the depicted relationship and story. Who are these children? Survivors of the violence taking place behind them? Are they a portrayal of the artist or art-tourists standing before the work? Was this a collaboration gone wrong?

On the wall opposite, viewer feels as though he beholds an answer: A porcelain-looking baby by Emil Alzamora caught eternally in the glow of a spot light. But it’s a fat baby, or a miniature sumo wrestler with his arms uplifted in heavenly grace. From outside the room, the piece is framed by the rectangular outline of the wall. It’s not completely clear to me how this resolves the mystery of Vasily Kafanov’s painting-installation, but the sequence of discovering how both works face each other across the long space makes an impact.

As you walk into the space, the delicately painted figures of Spanish artist Salustiano impress you forward—light beams from the red canvas to the left, from which a young girl peers from her book. The paintings embody the personality of their painted subjects so well that it’s as though they had been waiting in that room for you to join them in harmony of the fat baby Jesus on the wall.

You proceed into the backmost room of the gallery. There are two circular paintings by Sandro De La Rosa acting like mirrors across one another on opposite walls, They depict a woman with wings and another with birds on her arms, each utilizing earth tones and an intricate realism. Simply pretty and nonthreatening. On the adjacent wall between them, there are Angela Lergo’s six winged feet aligned equidistant on an eye level shelf. The feet are skin toned, realistic, but the wings have neon highlights at their roots.

While the show maintains a collection of easily digestible beauty, there is still irony. Not just in the absurd visual of Icarus feet, but in their clash with the style of the paintings of women with wings.

We appreciate beauty and technical skill. It is genuine, worthwhile, and certainly worth money, but maybe too naïve, or maybe incomplete without a dose of sarcasm.

This might be a microcosm of contemporary indecision, especially with the cultural decline of irony, which nowadays comes off as shallow ploys at cleverness. Could beauty the more authentic, higher path?

Sometimes galleries only ask the audience “Do you like this, or that?” A group show can expose a multitude of amazing work and still feel residual. The residue is fine- art as a medium in the craft of the gallery. And the craft could become a bird house, and the birdhouse could become a home for people that go “caw caw caw” and think they can fly. Now redirect your attention to severed feet and their feathers—Be warned, all ye who enter, this is what happens to those who fly too close to the sun. 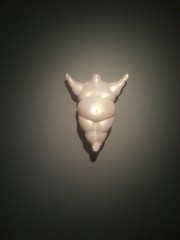 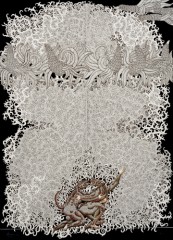 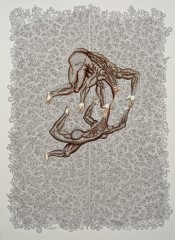 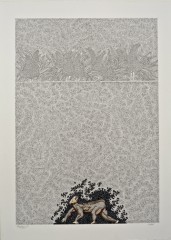